To better understand the challenges posed for RtoP in the aftermath of the UN-mandated, NATO-led operation in Libya, we asked a few ICRtoP Member organizations from throughout the world to reflect and provide insight on the following questions:

The enlightening responses we received drew on the individual expertise of these ICRtoP Members, and brought in unique regional perspectives as well. Members who contributed were:

Sarah Teitt, Outreach Director and China Programme Coordinator for the Asia-Pacific Centre for the Responsibility to Protect

The full post, “Civil Society Reflects on RtoP Post-Libya“, includes our review of the international response to the situation and analysis on its implications for RtoP, as well as the reflections on the challenges for the norm post-Libya by the individuals above.

We have also published a piece to mark the one-year anniversary of the first protests in Libya, which discusses the difficulties of the transition into the post-Gaddafi era.

According to a Reuters report, the UN Security Council will meet on 4 February at 10:00 a.m. to vote on the most recent version of the joint Western-Arab state resolution, which was put “in blue” and circulated to national capitals on 2 February. The Council has debated the draft resolution (original version here) since 27 January.

The Security Council meeting will come on the heels of reports of a massacre in the Syrian city of Homs on 3 February, with government security forces seeking to regain control of areas held by the rebel Free Syrian army. This is the second such time that a massacre has been reported in Homs as the Council has deliberated the draft resolution, with tens of civilians allegedly killed on 27 January.

While all 15 members of the Council supposedly support the text of the draft resolution, members were awaiting proposed amendments from Moscow on 3 February. However, according to Reuters, Russia did not present any changes to the document, and it remains unclear how it will vote on 4 February. 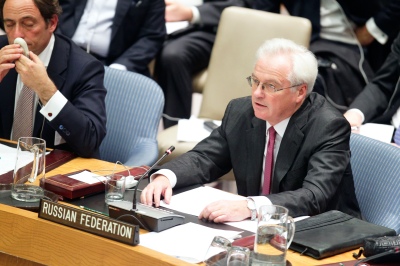 Initial word from Russia early on 3 February suggested that it was not satisfied with the text, with Interfax News Agency reporting Deputy Foreign Minister Gennady Gatilov as stating that Russian “cannot support the updated Moroccan draft on Syria.”

Meanwhile, the Times of India reported that India’s Permanent Represetative, Ambassador Hardeep Puri, will allegedly vote for the Syria draft resolution at the Council. India’s “change of heart” is a result of the recent and continued violence in the country, the Times of India stated. On 4 October 2011, India abstained from voting on an EU draft resolution that condemned the violence in Syria.

As a result of continued negotiations and concessions made by Western and Arab members – including dropping the reference of the involuntarily imposition of an arms embargo and economic sanctions in cooperation with the Arab League – the draft was altered before being put “in blue” and sent to national capitals.

The most recent draft includes a number changes to the 3rd version:

What’s In Blue offers an explainer on the changes, as well as on the status of negotiations ahead of the 4 February vote.

UPDATE (04/02/2012 @ 10:00 AM EST): According to the New York Times (with a report from AP), Russian Foreign Minister Sergei Lavrov stated after negotiations with US Secretary of State Hilary Clinton that issues remain regarding the draft resolution. Russia apparently takes issue with the demands for armed groups in the resolution, which it feels have not gone far enough, and that the resolution still “prejudges” the outcome in Syria. Lavrov was quoted as saying that the two issues needed to be amended if the resolution was to be adopted by the Council, and that Russia was not opposed to employing its veto.