This week in focus:
Ensuring the Inclusion of Young Women in
Conflict and Atrocity Prevention

As the Women, Peace and Security (WPS) Agenda marks its 20th anniversary in 2020, international action to include women’s perspectives, needs, and work in prevention efforts remains limited, and current prevention initiatives have yet to develop and integrate their gender analysis capabilities. Without adequate consideration of the unique ways women experience conflict and atrocities, many crises remain off and fail to make the UNSC agenda. In order to ensure its effectiveness, the accountability framework on WPS needs to draw from and strengthen the work of women of all ages. This is particularly crucial for young women who often have less access to prevention spaces at national, regional, and institutional levels, but play crucial roles in their local communities.

The International Coalition for the Responsibility to Protect (ICRtoP), the Global Partnership for the Prevention of Armed Conflict (GPPAC), Cordaid, WO=MEN Dutch Gender Platform, and Friedrich-Ebert-Stiftung New York, along with the Permanent Mission of Germany to the UN,  will convene a side event to amplify and assess opportunities for strengthening young women’s role in prevention. The event will provide an open space to share practical experiences, including successes, key challenges, and recommendations on sustained leadership of young women in conflict and atrocity prevention at the local level.

Sudan: Sudan Talks Delayed After Attacks in Nuba Mountains (VOA)
Last week, South Sudan played host to the peace talks between the newly established Sudanese transitional government and SPLM-North affiliates in Juba, South Sudan. The transitional peace agreement in Sudan stipulates that the government in Khartoum has six months to make peace with armed groups and factions. According to SPLM-North leaders, military attacks took place in the Nuba Mountains over the past 10 days, adding they would not continue negotiations until hostilities and military aggression were ceased. The transitional agreement, signed a few months ago, contains trust-building measures and a cease-fire agreement in order to bring about a democratic and civilian-led government in Sudan.

Syria: Turkey, Russia Reach Deal To Control Syrian Areas Once Patrolled By The U.S. (NPR)
Turkey’s President Erdogan and Russia’s President Putin reached an agreement on territorial control and ceasefire in Syria after the US announced its withdrawal of troops a few weeks ago. As a result of the ceasefire, US President Trump removed sanctions against Turkish officials, a move many consider to be impunity for military action conducted in the region. The withdrawal of US forces resulted in days of increased conflict, impacting Kurdish forces guarding ISIL troops, civilians, and humanitarian actors, during which UN officials, US state actors, and civil society organizations noted the serious implications of the Administration’s decision, urging for the respect of human rights, humanitarian law, and accountability.

Atrocity Prevention: Exploring New Approaches for Atrocity Prevention: From a “Responsibility to Protect” to a “Right to Assist” Civil Resistance Campaigns
Video from an event at the United States Institute for Peace exploring a new concept, the “right to assist.”

Burma:Myanmar: UN human rights expert calls for targeted sanction
Special Rapporteur for Myanmar reports no change in the situation in Burma and urges the UN Security Council to refer the situation to the ICC. 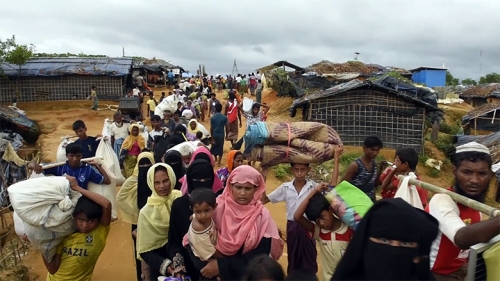