This week in focus:
ICRtoP and Partners Celebrate International Women’s Day with Release of Policy Memo and CSW63 Side-event

Integrating a conflict prevention and human security approach to the development agenda, including  strategically within national budgeting and security sector governance processes by tackling root causes of conflict through enhanced early warning and early response measures, can ensure that social infrastructure responds to the goals of sustainable development, equality and peace. As research and women’s lived experiences show, gender equality is linked to inclusive human security and safer, more peaceful communities when women and girls are empowered.

Along with the theme for International Women’s Day 2019, #BalanceforBetter, the priority theme for CSW63, focusing on access to sustainable infrastructure for gender equality, presents an opportunity to highlight ways in which the peace, development, and humanitarian intersect and reinforce their mutual goals. This includes: removing barriers and accelerating progress for gender equality; encouraging investment in gender-responsive social systems; and building services and infrastructure that meet the needs of women and girls.

In this vein, the ICRtoP, in partnership with Freidrich-Ebert-Stiftung New York, and the Global Partnership for the Prevention of Armed Conflict (GPPAC), working within the Prevention Up Front (PuF) Alliance, will co-host a side event to the Commission on the Status of Women (CSW) to explore the priority theme of the CSW63 through a conflict prevention lens. The panel discussion will unite gender experts from multiple agendas, including human security, governance, development, and humanitarian fields to discuss innovative peacebuilding practices.

Further information on our event can be found here.

In October 2018, the Friedrich-Ebert-Stiftung New York Office (FES New York), the International Coalition for the Responsibility to Protect (ICRtoP), and Global Partnership for the Prevention of Armed Conflict (GPPAC), working in partnership within the Prevention Up Front (PuF) Alliance, convened a side event to the annual UN Security Council (UNSC) Open Debate on Women, Peace, and Security (WPS) highlighting the benefits of and best practices for integrating and including women peacebuilders into prevention work. The panel brought together a diverse group of gender experts to discuss ways to advance women’s roles in conflict and atrocity prevention. Panelists reflected on their personal experiences, developing a set of recommendations focused on supporting collaboration, cooperation, and integration of women across communities of practice and contribute to their meaningful participation in peace processes, emphasizing the need to establish stronger linkages between the WPS, Sustainable Development, and conflict prevention and resolution agendas.

Burma: Report of the Special Rapporteur on the situation of human rights in Myanmar (A/HRC/40/68) (Advance Unedited Version) (UN Human Rights Council)
The UN Special Rapporteur on Myanmar has issued an advanced copy of the latest report on the human rights situation in the country, focusing on hate speech, the shrinking space for political opposition and democracy, as well as the continuance of armed conflict. As Ms. Yanghee Lee, the Special Rapporteur, did not receive permission to enter the country, the report’s findings are the result of visits and interviews conducted in Bangladesh and Thailand. The Burmese government attests that the report is counterproductive to the people of their country, but Ms. Lee continues to attempt to engage state officials in dialogues.

In another move to seek justice and accountability for the crimes committed in Burma, the Organisation of Islamic Cooperation unanimously approved a measure establishing the legal rights of the Rohingya people before the International Court of Justice. The measure paves the way for individuals to bring cases against the State for crimes committed against them by Burmese state forces in Rakhine State.

DRC: DR Congo: Tshisekedi pledges to free political prisoners (BBC)
DRC President Felix Tshisekedi announced a series of changes and guarantees as part of his “emergency program for the first 100 days.” These changes aim to “cement the democratic achievement” of the country’s peaceful transition of power and include freeing political opinion prisoners and dissidents as well as a recently announced coalition government uniting his party with Former President Kabila’s allies.

Sudan: Al-Bashir appoints Ahmed Haroun acting chairman of Sudan’s ruling party (Sudan Tribune)
In light of the protests against his regime, Sudanese President al-Bashir appointed Ahmed Haroun as the acting chairman of the National Congress Party. Similar to al-Bashir, Haroun is also subject to indictment by the International Criminal Court for war crimes. The changes in party and government leadership strengthened the voice of the political opposition, looking for an unconditional step-down the regime and its main actors as well as ending acts of oppression, torture, and violence against peaceful civilians, and releasing all political prisoners.

Iraq: Some Child Soldiers Get Rehabilitation, Others Get Prison
The Iraqi national government and the Kurdistan Regional Government (KRG) are detaining and prosecuting child soldiers for alleged ISIS involvement.

Syria: Hundreds of Isis prisoners with ‘no blood on their hands’ released in Syria
The Syrian Democratic Forces (SDF) have released suspected ISIS members, creating concern some may return to the group in the future.

Yemen: “DAY OF JUDGMENT” The Role of the US and Europe in Civilian Death, Destruction, and Trauma in Yemen
A report on the impact of US and European weapons in the Yemeni conflict urges for an immediate halt of arms sales to Saudi Arabia and the UAE in order to prevent further harm to civilians. 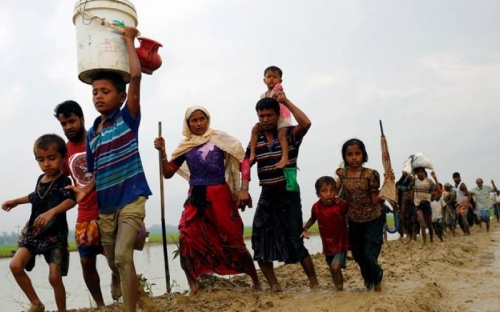