and prompts action by NGOs and EU 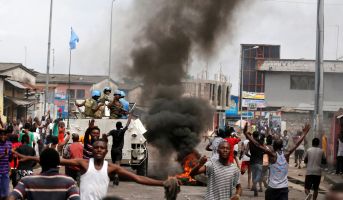 On 1 June, 262 Congolese and nine international non-governmental organizations co-signed a statement calling upon the UN Human Rights Council to create a specialized Commission of Inquiry into the ongoing violence in the Central Kasai region of the Democratic Republic of the Congo. According to Human Rights Watch (HRW), an ICRtoP member and signatory of the statement, Congolese forces have allegedly used excessive force against members of the Kamuina Nsapu movement since August 2016, including the alleged killing of apparently unarmed women and children. Additionally, UN investigators have found at least 42 mass graves in the area since conflict broke out in the region. ICRtoP members the Global Centre for the Responsibility to Protect and International Refugees Rights Initiative (IRRI) were also among the organizations adding their name to the statement.

Similarly, the European Union noted that the ongoing violence and alleged human rights abuses in the Central Kasai and Kasai regions prompted the regional organization to impose sanctions on nine prominent DRC officials this past week. According to the EU’s statement announcing the sanctions, which include asset freezes and travel bans, these particular officials are believed to have “contributed to acts constituting serious human rights violations in the DRC, by planning, directing or committing them.”

The renewed ethnic and politically-motivated conflict in the DRC has continued to increase in intensity, forcing over 922,000 DRC civilians to flee their homes in 2016, according to the annual Global Report on Internal Displacement released by the Internal Displacement Monitoring Centre (IDMC) this past week. IDMC revealed that the DRC had the highest recorded number of displaced civilians of any country last year, a number that seems only likely to grow if President Joseph Kabila neglects to hold the elections mandated by the peace agreement reached last year.

However, experts on the situation hope the EU sanctions will force the DRC government to take action and stabilize the conflict, as the continuation of EU monetary support for the elections is contingent on President Kabila holding to the agreement. Meanwhile, the 35th session of the UN Human Rights Council begins on 6 June in Geneva, but it remains to be seen if the body will discuss creating a Commission of Inquiry during that time.

Source of above photo: Reuters/Thomas Mukoya

A video newly released this past weekend showed suspected Burmese soldiers beating, interrogating, and threatening to kill captives. Based on the alleged soldiers’ accents, uniforms, and dialogue in the video, experts believe that the incident likely took place in Shan State, where conflict between rebels and government forces has been ongoing. Human rights advocacy groups have urged Burma’s government to investigate and hold the perpetrators accountable. However, representatives for both the military and State Counsellor Aung San Suu Kyi refused to give any information regarding the video when questioned on 30 May.

The UN has designated a three-member team to investigate alleged mass rapes and killings against Rohingya Muslims in Burma. According to a UN statement, the team is also meant to investigate allegations of arbitrary detention, torture, enforced disappearances, forced displacement, and unlawful destruction of property by security forces. However, the government has strongly expressed its reluctance to facilitate fact-finding missions in the past.

According to the Office of the UN High Commissioner for Refugees (UNHCR) on 30 May, at least 68,000 persons have been displaced this month alone due to the upsurge in militia violence, adding that the total numbers of displaced throughout the country have reached levels not seen since August 2014. During his visit to several conflict-prone towns in CAR on 31 May, Assistant Secretary-General for Human Rights Andrew Gilmour warned that armed groups are committing “atrocious attacks” against peacekeepers, women, and children at ever more frequent levels, and forces deployed to combat the armed groups lack sufficient resources.

On Tuesday, 30 May, two car bomb attacks killed at least 27 and wounded more than 100 people in Baghdad. The Islamic State (ISIL) claimed responsibility for the first attack, which was planned for late at night in order to target families celebrating Ramadan and have a “maximum impact.” The explosion killed at least 16 people, including children. Iraqi analyst Ali Hadi Al-Musawi told Al Jazeera that defeats in open conflict have made ISIL desperate to remain relevant, thus resorting to more targeted attacks against civilians.

As the liberation of Mosul from ISIL forces entered its final phase on Tuesday, the UN urged nearly 200,000 civilians to flee the ISIL-controlled part of the city, where they remain in great danger. The UN’s top humanitarian official in Iraq, Lise Grande, said the evacuation notice was not compulsory and the Iraqi government would seek to protect civilians who remained. Furthermore, the UN has been planning for the liberation of Hawija, the next town that Iraqi government forces may try to liberate from ISIL. The UN has built eight emergency camps near the area and is constructing more.

On 26 May, six children were abducted from their school in Lagos by Boko Haram militants. The abduction of young children in Nigeria by the group has become a common occurrence since 2009, with the victims often becoming forced laborers, sex slaves, or suicide bombers. The latest incident follows the group’s recent release of 82 Nigerian girls, who have reportedly been transferred to a rehabilitation center in Abuja to receive psychological and medical treatment.

13 South Sudanese soldiers appeared before a military court on 30 May for charges brought against them regarding a July 2016 attack in Juba, the South Sudanese capital. The soldiers were allegedly responsible for the rape of five foreign aid workers and the death of a civilian in a rebel-controlled area of the city. The trial will likely be watched closely as it will be a test of the South Sudanese government’s ability to try war crimes.

In the Norwegian Refugee Council’s (NRC) latest report, The World’s Most Neglected Displacement Crises, the NRC has stated that almost four million Sudanese civilians have been forcibly displaced during the past 14 years of violence between the Sudanese government and opposition forces, leading to a humanitarian crisis that is left largely untreated. Jan Egeland, the Secretary-General of the NRC, said many of the displaced have been forced to flee their homes several times due to intense violence, and that their vulnerability to being targeted becomes greater with each displacement.

Airstrikes and rocket attacks, allegedly at the direction of the US-led coalition and an armed Kurdish group, respectively, have been blamed for the deaths of 13 civilians in Raqqa on 28 May, according to the Syrian Observatory for Human Rights. It is likely the attacks were directed at Islamic State (ISIL) forces, as Raqqa has become the de facto stronghold for the organization in Syria and both groups are involved in conflict with ISIL there. The Observatory further reported that  US-led coalition air strikes killed at least 225 civilians between 23 April and 23 May, including numerous children, equaling the highest monthly civilian death toll for the coalition’s operations in Syria to date.

UN Humanitarian Chief Stephen O’Brien said on Tuesday that Yemen is now in the throes of the world’s largest food insecurity crisis, with 17 million people in the country struggling to secure food and around 7 million being “one step away from famine.” O’Brien added that the food crisis in Yemen is not a coincidence or a result of natural disaster, but “a result of inaction– whether due to inability or indifference – by the international community.”

The famine has been further exacerbated by the continuing conflict between the Yemeni government and Houthi rebels. According to a Yemeni government official, the government and the Houthis have been seeking to negotiate a deal that had originally been presented by UN Special Envoy Ismail Ould Cheikh Ahmed. The plan notably includes turning the port of Hodeidah over to a neutral party. The Yemeni government has threatened to attack Hodeidah, where a majority of humanitarian supplies and food enter the country, if the Houthis refuse to turn the port over to a neutral observer. Should such an attack occur, it would likely worsen the crisis further.