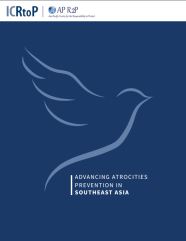 On 4-6 November, 9-11 November 2015, and 7-9 December 2015, the ICRtoP and the Asia-Pacific Centre for the Responsibility to Protect (APR2P) held three installments of their workshop series “Advancing Atrocities Prevention in Southeast Asia” in Bangkok, Thailand; Jakarta, Indonesia, and Kuala Lumpur, Malaysia, respectively. The organizers gathered civil society representatives from Thailand, Cambodia, Indonesia, the Philippines, Malaysia, and Myanmar in order to a) deepen support of and commitment to the prevention of genocide, war crimes, crimes against humanity, and ethnic cleansing in Southeast Asia; and b) strengthen early warning and response capacities at the domestic and regional levels to prevent and respond to atrocities. The overarching goal of the workshops was to develop civil society action plans for their countries on atrocities prevention.

The first bill proposed by the incoming government of Myanmar’s new Parliament, led by the National League for Democracy, created a new position in the government for Aung San Suu Kyi, that of state counsellor. This position, one that has been compared to that of a Prime Minister, would skirt the constitutional ban that prevented her from becoming president and allows her to have influence on the executive and legislative branches of government.

In her first act as State Counsellor, Suu Kyi announced a plan to release all political prisoners in the near future.

The UNSC, in a unanimous resolution, requested the Secretary-General to present it with options for deploying a police force in Burundi. Such a force would monitor the security situation on the ground, promote human rights, and advance the rule of law.

The Burundian government stated that it accepts the UNSC’s resolution. However, the main opposition coalition, CNARED, expressed its objections to the UNSC’s resolution, stating that “the resolution gives President Nkurunziza the power to continue killing” and that only a peacekeeping force could help end the crisis.

ICRtoP Member International Refugee Rights Initiative (IRRI) released a new briefing paper entitled “Burundi: A country on the edge.” Drawing on a mission to the country in February, in-depth interviews with refugees who have fled to Uganda, and IRRI’s previous experience in the country, the briefing offers insights on some crucial aspects of the current crisis.

The first trials against Congolese peacekeepers who allegedly sexually abused women and girls in CAR started in DRC. Meanwhile, in France, a prosecutor opened preliminary investigations into allegations of sexual abuse committed by French troops of MINUSCA. France also began withdrawing its troops from CAR on Wednesday.

The newly sworn-in president of CAR, Faustin Archange Touadera, announced that he had appointed Simplice Sarandji as the new prime minister.

Ambassador Robert King, US special envoy for North Korean human rights issues, is in South Korea in order to assess how to address the gross human rights violations being carried out by North Korea.

Democratic Republic of the Congo:

A UN Response Team, charged with probing into allegations of sexual abuse by UN peacekeepers in the DRC, have found through their investigations allegations that point to sex with minors as well as paternity claims by victims.

Tanzania announced that it has already formed an investigation team that would travel to the DRC to investigate accusations of sexual abuse by its peacekeepers.

Israel is charging the soldier who shot and killed a Palestinian man in the West Bank with manslaughter.

The United Nations Relief and Works Agency for Palestine Refugees (UNRWA) condemnedthe destruction of Palestinian homes in the West Bank. Lance Bartholomeusz, Director of UNRWA Operations in the West Bank, stated that over 700 people have been displaced since the start of 2016, an alarmingly high number compared to the same period last year.

ISIL militants killed at least 29 people in a series of suicide attacks carried out on Monday. Most deadly was an attack in a Dhi Qar restaurant popular amongst Shiite fighters that killed an approximated 14 people. Meanwhile, a car bomb set off in Basra killed at least five and wounded an additional 10. Another militant reportedly drove his car into a security checkpoint at Sadr al-Qanat; the wreck killed six troops and wounded 13. Finally another car bomber killed four troops and wounded 10 more at a paramilitary headquarters in Mishahda.

Judges at the ICC decided to throw out a case against Kenya’s Deputy President William Ruto and journalist Joshua arap Sang for crimes against humanity due to a lack of evidence. Mr. Ruto denies his involvement in the charges of murder, deportation, and persecution in the period after Kenya’s 2007 elections and many of the prosecution’s key witnesses have changed their statements. The prosecution claims this is due to bribery and intimidation, but in February ICC judges still denied the prosecution the use of previously recorded witness testimonies that have been recanted. The charges will be vacated and the accused are to be released, but the decision is still subject to appeal and does not preclude new prosecution in the future.

The UNSC welcomed the arrival of the Government of National Accord in Tripoli, citing its hope that the government would “tackle Libya’s political, security, humanitarian, economic and institutional challenges and to confront the rising threat of terrorism.” The EU also demonstrated its support for the UN-backed government when it  imposed travel bans and asset freezes on three individuals who oppose its establishment.

Ali Al-Za’tari, senior UN humanitarian affairs official in Libya, called for an independent investigation into the deaths of four migrants who had been detained by the authorities, citing the widespread “abuse and exploitation” of migrants in the country and calling for their protection.

On Tuesday, UN Under-Secretary-General Hervé Ladsous, the top UN peacekeeping official,told the Security Council that, “every day lost during the implementation of the peace agreement is a day won for extremist and terrorist groups who have been gambling on the failure of the Mali peace process.” He also warned that these delays would impact intercommunal conflicts and have unfortunate consequences for civilians. Mr. Ladsous did, however, also report positive developments towards the implementation of the Agreement on Peace and Reconciliation, but warned that “progress on defence and security issues is too slow.” Furthermore, he announced that a strategic review of MINUSMA, the UN peacekeeping operation in Mali, will be completed before the Secretary-General’s next report in May, roughly one month ahead of the date MINUSMA’s current mandate is set to expire.

President Ibrahim Boubacar Keita has declared a 10-day State of Emergency over the entire country due to “terrorist threats” following a meeting of ministers on Monday. The previous State of Emergency ended less than a week before on 31 March.

Nigerian authorities have arrested Khalid al-Barnawi, the leader of Ansaru, a Boko Haram breakaway group. Ansaru is aligned ideologically with al-Qeada in the Islamic Maghreb (AQIM). Like AQIM, Ansaru is infamous for kidnapping foreigners and is accused of killing several Westerners. Since 2012, the US has had a $5 million USD bounty on al-Barnawi and branded him one of Nigeria’s three “specially designated global terrorists.”

According to a Nigerian Defense Ministry spokesman, the country’s military has opened a camp to rehabilitate repentant ex-Boko Haram fighters who have surrendered. The camp provides the ex-fighters with vocational training to help them meaningfully contribute to economic growth in the country. He further claimed that around 800 members of Boko Haram have surrendered within the last three weeks.

The military has also released a statement urging other fighters to surrender, warning that it would not relent in the fight against Boko Haram until the group is “completely neutralized”. Since 26 February, the military claims to have rescued almost 11,600 civilian hostages from Boko Haram camps and villages in northeastern Nigeria. Another army spokesman haspromised troops that the military will address “logistics deficiencies which have hindered the optimal conduct of the Nigerian Army’s counter insurgency operations.”

The leader of the SPLM-IO, Riek Machar, announced on Thursday that he would return to the state capital of Juba on 18 April, in order to form a transitional government alongside President Salva Kiir.

The conflict has led to a record 5.8 million people in South Sudan facing extreme poverty and starvation. The UN’s Food and Agriculture Organization and World Food Program (WFP) stated that hunger in the nation has increased significantly since the start of fighting two years ago.

Under-Secretary General for Peacekeeping Operations Herve Ladsous has reported the continuation of a series of clashes and serial bombings in rebel occupied Jebel Marra. As a result, 103,000 Sudanese have sought refuge at the four Internally Displaced Persons (IDP) camps facilitated by the joint UN-African Union mission in Darfur, UNAMID. Ladsous also stated that 138,000 people have been displaced since January 2016.  However, restrictions imposed by the Sudanese government on aid organizations and UNAMID has made it difficult to determine the exact number of persons displaced by recent fighting.

Amid the recent increases in conflict occurring in and around Jebel Marra, Darfuris have grown wary about the referendum set to take place next week from 11-13 April. The referendum will give residents the choice to either keep the five existing states of Darfur or to unite the region into a single, semi-autonomous zone. President Omar al-Bashir, who has been charged by the International Criminal Court for committing mass atrocities, intends to move forward with the vote despite it being rejected by many. The referendum was part of the 2011 peace agreement between Khartoum and numerous rebel groups.

Islamist rebels shot down a government warplane on Tuesday and captured its pilot. The event happened in an area south of Aleppo where al Qaeda’s Nusra Front, along with its allies, launched a new military initiative last week to take back territory from Assad. However, a prominent member of the al-Nusra Front, Abu Firas al-Suri, was killed on Sunday by an airstrike in the rebel-occupied province of Idlib along with 20 other extremists part of the al-Nusra faction. The Syrian Observatory for Human Rights has confirmed Abu Firas’ death andsuspects that either Syrian or Russian forces are responsible.

Meanwhile, the Syrian government reclaimed yet another town from ISIL, one week after capturing the historic city of Palmyra. Syrian forces gained control of Qaryatain,a crucial oil and gas-rich area. The territorial gain will also help Assad block militant supply routes between Damascus and Homs. The town will now act as a foothold for attacking ISIL alongside the Iraqi border.

Leaders of the religious Alawite sect, to which President Bashar al-Assad belongs, released a lengthy report distancing their community from the Assad regime. In the document, titled “Declaration of Identity Reform,” the group said that they represented a third model of Islam that wishes to support “the values of equality, liberty and citizenship” and called for the secularization of the future government of Syria. Furthermore, the community stressed that the legitimacy of the Assad regime in years to come lies only on the basis of democracy and human rights.

In the lead up to the resumption of the Geneva peace talks next Monday, Assad has stated that he believes the talks could lead to a new Syrian government made up of an opposition, independents and loyalists. Nevertheless, he completely rejected the idea of establishing a transitional authority. For its part, the Syrian opposition, as represented by the High Negotiations Committee, has continuously called for a halt on civilian attacks and for the Geneva talks to result in the formation of a transitional government that excludes Assad altogether. The second round of peace talks is expected to address the issue of a political transition in Syria as well as the future of the Assad regime.

The US and the UK received criticism for continuing to deliver arms to Saudi Arabia, which is reported to be violating international humanitarian law in its fight against Yemen’s Houthi rebels.

A delegation of Houthi rebels is holding talks in Saudi Arabia ahead of peace negotiations scheduled on 18 April, a move welcomed by the Saudi government.

The Alliance for Peacebuilding, The United Nations Development Program and International Interfaith Peace Corps is holding a Roundtable on Countering Violent Extremism in Washington DC on 18 April.   RSVP here.