The UN Security Council and the Responsibility Not to Veto 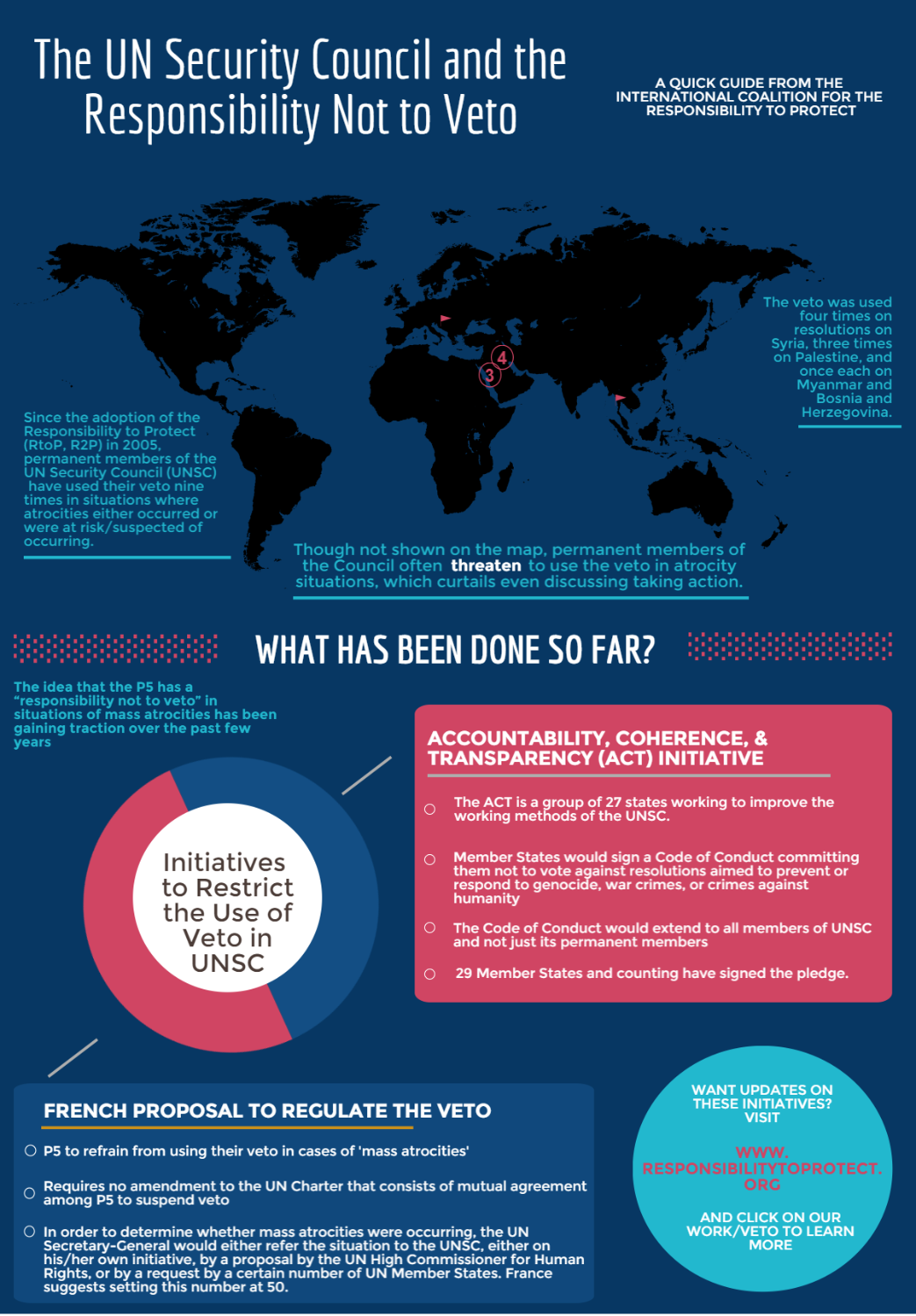 When resolutions on crises where genocide, war crimes, crimes against humanity, and/or ethnic cleansing are imminent or ongoing come before the Security Council’s agenda, Permanent Members should not obstruct united action to protect populations from atrocity crimes.The recent vetoes in the Security Council on resolutions pertaining to Syria and Srebrenica have reinvigorated efforts in this regard. Click on the infographic to the right for a brief overview on these current initiatives, which will enhance the Council’s ability to uphold its Responsibility to Protect.

The president ordered an extension on the state of emergency for the Kokang region of the Shan state until 17 November. The state of emergency began mid-February when fighting erupted between government troops and ethnic Chinese rebels, forcing tens of thousands to flee. The area will remain under military control during the November 8 election.

The Karen National Union (KNU) announced that it will sign the National Ceasefire Agreement (NCA) with the Myanmar government. Human rights watch argued that the targeted arrests of land rights activists in the Karen state are the newest form of political prisoners.

The opposition in Burundi called on Nkurunziza to step down by 26 August, the last day of his current mandate. However, President Nkurunzizia was sworn in during a surprise ceremony for a third term on Thursday.

Four civilians were killed on Tuesday night in Bujumbura in an apparent revenge attack against members of the ruling party. The UN Secretary- General Ban Ki-moon condemned the assassination of Burundi’s former Army Chief of Staff, Colonel Jean Bikomagu, by unknown assailants on 15 August, which marked the second attack on a senior official in Burundi this month.

OHCHR reported that at least 96 people have been killed in Burundi since the outbreak of violence in April. The AU warned that Burundi is at risk of deteriorating into further violence.

New rape allegations against members of a MINUSCA military contingent were raised  on 12 August. UN Secretary-General Ban Ki-moon appointed Parfait Onanga-Anyanga of Gabon as the new head of MINUSCA. Associated Press reported that France is considering withdrawing more of its troops from the CAR.

Democratic Republic of the Congo:

A government spokesperson announced that 34 people have been charged with crimes, including genocide, murder and rape in connection with ethnic violence in the southeast.

Following the numerous allegations of child abuse by MINUSCA peacekeepers in the CAR, MONUSCO launched a campaign prevent sexual abuse by its peacekeepers, displaying the words “Sex with children is a crime”. Martin Kolber, the head of MINUSCA, declared that the mission must work to withdraw from the country.

The Enough Project announced that over 140 mines in the DRC are now conflict-free.

Palestinian refugees protested against cuts by UNRWA, which the UN agency states are due to a lack of funding. However, many of the refugees believe the cuts are politically-motivated.

Reportedly, preparations have been made for a senior Hamas delegation to travel to Egypt for ceasefire talks with Israel, with accounts that a long-term ceasefire is under negotiation between the parties.

ISIL claimed responsibility for last Thursday’s attack on a crowded market in Sadr City, which killed at least 67 people and injured 200 others.

The Organization for the Prohibition of Chemical Weapons, OPCW, announced it would inquire into allegations of possible uses of chemical weapons by ISIL in Iraq against Kurdish fighters.

The U.S. and its coalition allies claimed they had conducted 22 air strikes against ISIL militants in Iraq and Syria over a 24-hour period.

The ICC Appeals Chamber ordered judges to reconsider whether Kenya failed to cooperate with the Court regarding the case against President Uhuru Kenyatta.

In Sirte, at least 25 people were killed, during clashes between ISIL’s affiliate in Libya and a rival Islamist group back by armed civilians. Fighting broke out after the ISIL affiliate killed a senior Muslim cleric who had refused to comply with ISIL’s orders for residents to pledge allegiance or face death. Other reports stated that at least 106 people were killed over the three days of fighting between ISIL loyalists and local tribesmen in Sirte.

The internationally-recognized government in Libya (HoR) appealed to fellow Arab states to conduct air strikes against ISIL in Sirte. The spokesman of Libya’s HoR, Prime Minister Abdullah al-Thani, announced that he has withdrawn his offer to resign his post, stating that the resignation would have added to the chaos in the country.

Over the weekend, violence erupted between armed groups in the Kidal region, breaking the ceasefire agreement.The pro-government Gatia militia claimed to have killed at least 20 separatists during the fighting. After three days of clashes, MINUSMA secured the town of Kidal and set up a security zone to curb the fighting. However,the CMA asked MINUSMA to immediately remove the security zone and “let the parties settle their differences.”

The UN warned of a new hunger crisis in Mali, with more than 715,000 children at risk of acute malnutrition.

Over the weekend, violence erupted between armed groups in the Kidal region, breaking the ceasefire agreement.The pro-government Gatia militia claimed to have killed at least 20 separatists during the fighting. After three days of clashes, MINUSMA secured the town of Kidal and set up a security zone to curb the fighting. However,the CMA asked MINUSMA to immediately remove the security zone and “let the parties settle their differences.”

The UN warned of a new hunger crisis in Mali, with more than 715,000 children at risk of acute malnutrition.

Last Friday, OCHA reported that the month-long restrictions on the movement of goods by air and river routes in South Sudan had been lifted, allowing delivery of aid supplies to Malakal.

President Salva Kiir declined to sign an IGAD-brokered peace deal by the 17 August deadline, requesting an additional 15 days to review its provisions. The government spokespersoncalled the deal a “sell-out” for the people of South Sudan. Rebel leader Riek Machar did sign the deal, which mandates the demilitarization of Juba; gives the rebel forces 40% share of government positions in Unity, Upper Nile, and Jonglei and 33% in the central administration; and includes language on establishing a court to try violations of national and international law.

In response to Kiir’s failure to sign the accord, the US circulated a draft resolution to the Security Council containing provisions for increased sanctions and an arms embargo in South Sudan. Under the draft resolution, if Kiir does not sign the agreement by 1 September, an arms embargo and increased targeted sanctions would go into effect on 6 September for a period of 1 year. The draft also includes language on accountability, calling for the Secretary-General to provide resources for the establishment of a hybrid court for South Sudan and report back to the Council on progress in this regard in 3 months. Should the Council decide there has been insufficient progress on the hybrid court or more broadly on the promotion of “accountability for the gravest offenses,” the Security Council retains the option of referring the situation in South Sudan to the ICC.

However, despite this draft resolution, reports have emerged that Kiir has told John Kerry, U.S. Secretary of State, that he will sign the peace deal after “a couple more days of consultation.”

The non-signatory rebel groups to the Doha Document for Peace and Development, together with the acting chief of the African Union United Nations Mission in Darfur (UNAMID) agreed to work together for a viable and lasting negotiated settlement in order to end the 12-year conflict in the western Sudan region. Reconciliation efforts between the Fellata and Salamat tribes in South Darfur are underway after clashes last week left 54 dead and 29 wounded.

On Sunday, a series of government airstrikes killed over 110 people and injured more than 300 in a marketplace in Douma near Damascus. Stephen O’brien, Under-Secretary-General for Humanitarian Affairs, condemned the attack and conveyed that he is “horrified by the total disrespect for civilian life in this conflict.”

A suicide bomber killed at least 10 members of Kurdish security forces and 6 civilians in an attack claimed by ISIL. Meanwhile, more than 40 people were killed and wounded in an explosion of a booby-trapped vehicle near an Asyish post in the city of al- Qameshli.

The UNSC approved a Presidential Statement backing preparatory talks for a resolution to Syria’s political crisis. The statement supported UN mediator Staffan De Mistura’s plan to work towards “political negotiations and a political transition” based on the Geneva Communique, adopted in 2012 by the first international conference on the issue and endorsed by the Security Council.

A ceasefire established between Syrian rebels and pro-government forces in two Shia villages near the Turkish border and a Sunni town near the Lebanese border has collapsed. The ceasefire was agreed last week to allow passage of food and medical supplies to rebel forces in Zabadani and government forces in Fuaa and Kafraya in the northwest.

A new op-ed by the UN Special Advisers on Genocide Prevention and RtoP reminded the parties to the conflict, the media, and the international community of their RtoP in Yemen.

Over the weekend, pro-government forces recaptured Zinjibar from Houthi rebels, killing at least 19 people and injuring 150 others during the fight. Pro-government fighters additionallyseized six districts in the central province of Ibb, as they make their way closer to the currently Houthi-controlled city of Sana’a.
The ICRC president, Peter Maurer, determined the situation in Yemen to be ‘catastrophic’ on his visit to Sana’a. UN Special Rapporteur on the right to food warned that the deliberate starvation of civilians could constitute a war crime and/or crime against humanity. A new report by UNICEF announced that an average of eight children per day are being killed or maimedevery day in Yemen.

Amnesty International released a new report detailing the impact on civilians of Saudi Arabia-led coalition airstrikes and attacks by pro and anti-Huthi armed groups in Ta’iz and Aden, saying that such violations of human rights could amount to war crimes.

Twenty three NGOs, including four ICRtoP members, published a statement on the need for the Human Rights Council to establish a Commission of Inquiry in Yemen.

The Global Policy Initiative of Columbia University released a report of their April 2015 conference “Responsibility While Protecting: Implementation and the Future of the Responsibility to Protect.”

The Cambodian Institute for Cooperation and Peace wrote an article in the Phnom Penh Post urging Cambodia to take the lead in mainstreaming RtoP within ASEAN.