WHEN ARMS GET IN THE WRONG HANDS: Arms trade and the implications for upholding the Responsibility to Protect

The trade of virtually all goods is regulated and controlled; however, no global standard exists for the international trading of arms. As we speak, the United Nations General Assembly (UNGA) is meeting for the final negotiations on an international Arms Trade Treaty (ATT). The idea of a treaty was introduced at the UN in 2006 in the form of a draft resolution. In 2009, the UNGA adopted Resolution 64/48 to convene a UN Conference on the Arms Trade Treaty to stop the lethal consequences of the uncontrolled trade of arms which have included hundreds of thousands of deaths, women raped at gunpoint and children recruited into armed groups; not to mention the many injured, tortured, abused or taken hostage. As the United Nations Secretary General has argued, “violence against civilians is…unquestionably abetted by the free flow of weapons…we urgently need a robust and comprehensive agreement that addresses the humanitarian impact of the poorly regulated trade in arms.” From 18-28 March 2013, the UNGA will negotiate the final text of the Treaty. Many civil society groups and members of the NGO coalition, Control Arms, including Vision Gram International and Africa Peace Forum have stated that the document being discussed is a weaker version of the original proposal with loopholes that undermine the effectiveness of the treaty, including ambiguity in the use of terms such as “trade” and “transfer” and lower standards of control for ammunition. Nonetheless, many states and civil society organizations are positive that, if passed, the Treaty will be a step forward in achieving more security and protection. 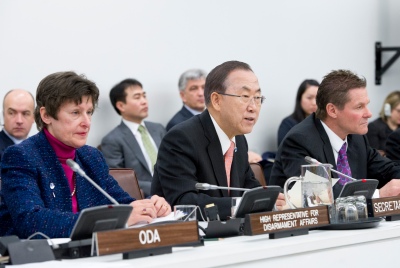 UN Secretary General at the Opening of the Final Conference on The Arms Trade Treaty. Credit: UN Photo/Eskinder Debebe

The arms trade is a globalized and lucrative business – Oxfam International estimates that between 2008 and 2011, the trade was worth more than $9.7bn. There is an incredibly strong link between poor arms control, access to conventional weapons and the increased likelihood of intra-state violence, which can lead to the commission of mass atrocities. The presence of illegal arms and armed elements is one of the eight indicators of the Office of the UN Special Advisor on the Prevention of Genocide‘s analysis framework which assists in determining whether there may be a risk of genocide in a given situation. As small arms and ammunition can be easily transferred, stolen or diverted, they are frequently the weapons of choice in armed conflicts. Thus, regulating their trade and stopping their illegal diversion can have a powerful impact on a state’s ability to prevent mass atrocities. According to Dr. Robert Zuber, of Global Action to Prevent War (GAPW), the presence of large amounts of arms creates an unpredictable security situation and undermines state control of the security sector;

“The irresponsible transfer of weapons and ammunition and proliferation of illicit small arms have direct implications for our ability to secure our streets…[and on] the ability of governments to discharge many of its important functions including the primary responsibility to protect civilians from violence.” 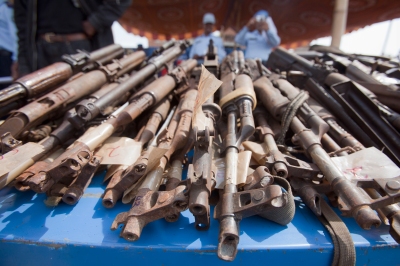 Weapons retrieved from rebels by the UN’s mission in the Democratic Republic of the Congo (MONUSCO) in coordination with the UN Mine Action Service (UNMAS) in DRC. Credit: UN Photo/Sylvain Liechti

In addition to contributing to cycles of violence, the presence of illicit arms in the hands of non-state actors and rebel groups complicates regional and international efforts to strengthen a state’s capacity to fulfill its primary responsibility to protect. What’s more, though it’s clear that governments need to minimize the spread of illicit weapons to uphold their commitment to protect populations from mass atrocity crimes, in many cases, it is the state, itself, that is complicit in the conflict and the spread and use of illegal arms.

The responsibility to minimize the spread of weapons is not limited to countries in conflict. The five Permanent Members of the UN Security Council, or the ‘P5’ – China, France, Russia, the United Kingdom and the United States – are the world’s largest arms traders. Amnesty International‘s report entitled “Major Powers Fueling Atrocities: Why the World Needs a Robust Arms Trade Treaty,” demonstrates how all five countries have “engaged in arms deals that fueled atrocities”. China‘s state-owned companies, for example, supplied weapons to the Gaddafi regime in Libya as well as ammunition for small arms used by security forces and militia in Darfur; while Russia supplies weapons to Syria, Myanmar and Sudan that have been used to attack civilians. The government of Russia, which has admitted to supplying Syrian forces with weapons, has blocked several UN resolutions aimed at halting the violence by imposing an arms embargo and sanctions on Syria and says it will continue to supply weapons to the regime. Meanwhile Saudi Arabia and Qatar are delivering arms to the opposition forces, which some say could prolong the increasingly deteriorating humanitarian crisis and civil war. While some Western states originally pushed Russia to stop its arms trade to Syria, the United Kingdom and France  are now calling for the European Union to lift its arms embargo on Syria so they can send weapons to the rebels. Though the United States has argued that more weapons in Syria would do more damage, it has promised not to get in the way of other governments supplying arms to the rebels. This flow of weapons to the Syrian opposition has sparked a debate, with many arguing that these measures, undertaken by the international community to uphold protection obligations, actually perpetuate more violence. As one human rights blog, Self Evident Truth, puts it:

“So long as the superpowers…arm the world with small arms, their approval of the responsibility to protect has little meaning.”

The importance of disarmament

In addition to preventing conflict, the regulation of the arms trade is an important step in securing a safe environment in post-crisis situations. According to Ray Acheson, Chair of civil society organization Reaching Critical Will, “the excess weapons available throughout the world continue…impeding the post-conflict rehabilitation and reconstruction”. This has been devastatingly illustrated in the case of Libya, as remaining weapons in the hands of thousands of militias have hampered the state’s control over the security sector, exacerbating the country’s already unstable situation. This case also showed the importance of preventing the spread of weapons in post-conflict countries as reports emerged that missing weapons from Libya may have appeared in the hands of Islamist rebels in Mali. Human Rights Watch recently stated that;

“Urgent efforts to secure anti-aircraft missiles from Libya…blinded western governments to the danger of other weapons going missing and fueling conflicts in Mali…it takes a tiny fraction of the weapons missing in Libya to supercharge a conflict like Mali.”

Thus, amid attempts to protect populations in Libya, a lack of oversight of the flow of weapons throughout the country may have actually played a part in fueling conflict in Mali by providing easily accessible arms to northern-based rebel groups.

Article 3 in the latest draft of the ATT, on “Prohibited Transfers”, requires that a state party not authorize a transfer “for the purpose of facilitating the commission genocide, crimes against humanity, war crimes.” According to Reaching Critical Will’s ATT Monitor, this language demonstrates that governments agree that arms must not be transferred to a state where there is a risk of gross violations of human rights and international humanitarian law. While this is a start, Africa Peace Forum states that under the treaty the “states’ obligation to refuse transfers if they assess there is a substantial risk that the transfer would result in human rights and humanitarian law violations are legally ambiguous.” Meanwhile, according Amnesty International, these references are too narrow and the definition of war crimes is extremely limited. Reaching Critical Will, argues“a circumstance in which a state would apply to import arms specifically for the purpose of committing genocide or any of the other crimes listed is a rather high threshold for prohibition.” Oxfam adds that, “the draft Article as it relates to genocide falls far short of the duty to prevent genocide by taking action before it happens…As currently drafted…Article 3.3 will apply only where genocide has already taken place.” Such language risks undermining the very foundation on which RtoP is based: the prevention of atrocities.

Amnesty International has suggested revisions to the text to support a preventative framework, stating that, “a State Party shall not authorize a transfer of conventional arms within the scope of this Treaty if the transfer would facilitate the commission of genocide, crimes against humanity, war crimes or a consistent pattern of serious violations of international human rights law.”

Going forward with or without a treaty

The link between the flow of illicit weapons and the increasing likelihood of RtoP crimes as well as the devastating impact of access to weapons on a state’s ability to protect its population show the urgent need for regulations on the trade of arms, which the ATT can provide. However, it is also important to note that even if the Treaty is not adopted, willing governments can take measures to oversee the safe sale of arms and civil society can advocate for such measures. While a strong Arms Trade Treaty could greatly reduce serious human rights violations and contribute to the general reduction of conflict throughout the world, a weaker treaty might be worse than no treaty at all. The important truth is that with fewer weapons available, governments will be one step closer to being better able to uphold their responsibility to protect their populations from RtoP crimes; it is up to activists, civil society organizations, the media, and policymakers everywhere to make this a reality.

One response to “WHEN ARMS GET IN THE WRONG HANDS: Arms trade and the implications for upholding the Responsibility to Protect”