The United Nations General Assembly voted overwhelmingly in favour of a Saudi-drafted UNGA draft resolution on the situation in Syria on 16 February. 137 states voted in favour, 12 in opposition, and 17 states abstained from voting. Syria, Russia, China, Iran, Venezuela, the Democratic People’s Republic of Korea, Nicaragua, Bolivia, Ecuador, Belarus, Zimbabwe, and Cuba all registered votes against. 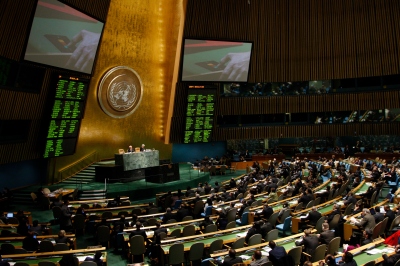 The resolution calls for the UN and its members to support the League of Arab States’ peace plan in Syria, which provides that President Bashar al-Assad delegate power to deputy in order to begin the process of a political transition. It also condemned the escalating violence in Syria, urged the Syrian authorities to put an end to further violations of human rights, and stressed the need to ensure accountability for all violations, including those that may amount to crimes against humanity. The resolution also calls for the UN Secretary-General to appoint a Special Envoy on Syria, and for the UN to provide technical and material assistance to the League of Arab States.

One response to “Breaking: Overwhelming Majority of UN General Assembly Votes in Favour of Draft Resolution”