The United Nations Security Council met on 31 January in an extraordinary session on the situation in Syria, with Council members debating the recent draft resolution circulated by Morocco. The Council was briefed by the Sheik Hamad bin Jassim bin Jabr al-Thani, Prime Minister and Minister of Foreign Affairs of Qatar, and Nabil Elaraby, Secretary-General of the League of Arab States.

The Qatari Prime Minister expounded Syria in his address to the Council for avoiding cooperation with the Arab League and failing to implement multiple initiatives by the organization to resolve the crisis. Instead, al-Thani stated that, “the only solution available to it [the Syrian government] was to kill its own people. The fact of the matter is that bloodshed has continued and the killing machine is still at work.” 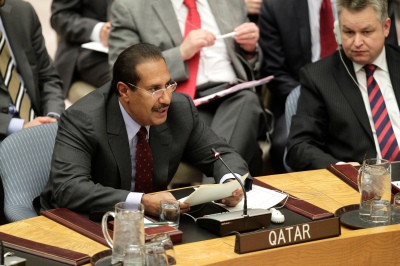 Both al-Thani and Arab League Secretary-General Elaraby were resolute in making clear that the draft resolution being negotiated by the Council was not a pretext for military intervention in Syria, and included no such authorization to use force in the country. Stressing the importance of a peaceful political settlement of the crisis, Elaraby urged the Council in his remarks to support the current Arab League initiative by passing the draft resolution.

US Secretary of State Hilary Clinton, French Minister of Foreign Affairs Alain Juppé, UK Foreign Secretary William Hague, and Ministers from Germany, Portugal, Guatemala, and Morocco also addressed the Council, highlighting the importance attached to the Council’s deliberations of this draft resolution on the situation in Syria.

In his address Juppé chided the Security Council for its “scandalous silence” on the Syrian matter. The French Foreign Minister was also the first to mention the Responsibility to Protect at the Council meeting, stating:

Each State has the responsibility to protect its civilian population. Not content with failing to protect its people, the Syrian regime despicably massacres them without restraint. This behavior has direct consequences on international peace and security: thousands of refugees are fleeing the fighting, violations of the sovereignty of neighboring states, heightened ethnic tensions, so many direct repercussions on the stability of an already fragile region. Without even mentioning the responsibility to protect, these regional consequences are enough to establish the Security Council’s responsibility.

Harold Caballeros, the Guatemalan Minister of Foreign Affairs, joined France in affirming his country’s support for the Responsibility to Protect, stating:

We understand that popular demands expressed in a pacific manner cannot be equated with a Government that uses force to address those demands. That is why, in an era when the principle of the Responsibility to Protect is being questioned, we are not ashamed to affirm that…we support that principle.

Those speaking in support of the resolution were staunch in their condemnation of the Assad regime and the continued violence in country, and put their full weight behind the Arab League plan. In attempting to assuage Russian concerns, Secretary Clinton, Minister Juppé, Minister Hague and other Ministers and Permanent Representatives were adamant that the draft resolution did not authorize the threat or use of force to intervene in Syria, and instead was focused on finding a political settlement that ended the violence and realized the aspirations of the Syrian people.

Russia, who has put up the most resistance to the current draft resolution, offered its reservations at the Council, with Permanent Representative Ambassador Vitaly Churkin asserting that the process to resolve the crisis must be Syrian-led, and must not include economic sanctions or the use of force. “The Council cannot impose the parameters for an internal political settlement,” said Ambassador Churkin, “it simply does not have the mandate to do so.”

Ambassador Li Baodong, Permanent Representative of China to the UN, affirmed his country’s support of Russia’s position towards the draft resolution, going as far as saying that it “fully supported” Russia’s draft resolution, circulated on 15 December 2011, while only “taking note” of the Arab League plan. The Russian draft, which placed equal blame for the violence on the government and “extremist groups”, was criticized by Council members as being too lenient towards the Assad regime.

Both India and South Africa echoed the concerns expressed by Russia and China, and emphasized the need for a Syrian-led process without outside interference. Referencing the intervention in Libya, Ambassador Baso Sanqu, South Africa’s Permanent Representative, also affirmed the need to avoid the use of military force. 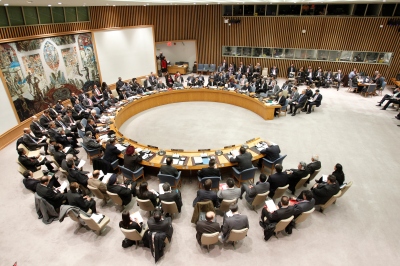 The Council debates the situation in Syria. (UN Photo/JC McIlwaine)

Negotiations continued on the draft resolution on 1 February at the UN Security Council, with Permanent Representatives debating its content. Security Council Report’s What’s In Blue reported that the divisive issue, “remains the political transition process as defined by the Arab League”, while other issues that remain unresolved include:

A recent draft of the resolution, obtained and published by Inner City Press, shows the state of negotiations on its clauses amongst Council members.

As evident in the draft, preambulatory paragraph 8, which expresses “grave concern at the continued transfer of weapons into Syria” and “calls on Member States to take necessary steps to prevent such flow of arms”, has been crossed out. Although the text did not explicitly include the imposition of an arms embargo, this change reflects one of Russia’s “red lines” in the negotiations. The Washington Post reported that Russia would continue to sell arms to Syria, with Deputy Defense Minister Anatoly Antonov affirming it would honour its “obligations” to the Assad government.

Operative clauses 7 a-c – which provide for the formation of a unity government, the delegation of Assad’s powers to a Deputy, and the holding of free and fair elections – have also been dropped from the text. As a Reuters report indicates, the changes reflect both Russia and China’s uncertainty towards the imposition of a political settlement in Syria by the Arab League and their opposition of forced regime change.

However, while the draft resolution has dropped text calling for Assad to hand over power, it still supports the Arab League’s 22 January decision to facilitate a political transition. As reported by the BBC, “Western diplomats say this means that while the draft no longer mentions the details of the Arab plan, it still clearly backs the substance.”

The revisions apparently reflect an effort by the United States, European Union Council members, and Arab allies to drop more the more contentious measures of the resolution in exchange for Russian support, according to The Washington Post’s Colum Lynch. The Associated Press reported Council members would continue to discuss the revised draft behind closed doors on 2 February, and it remains unclear whether the changes will be enough to garner Russia’s support despite the revisions.

With Western and Arab nations engaged in the equivalent of a diplomatic full-court press to dissuade Russia from vetoing the draft resolution, civil society also spoke out against the employment of the veto. On 1 February, Amnesty International (AI) called on Russia not to block international efforts to resolve the crisis in Syria, with the organization’s representative to the UN stating:

Russia’s threats to abort a binding UN Security Council resolution on Syria for the second time are utterly irresponsible…Russia must work with other Security Council members to pass a strong and legally binding resolution that will help to end the bloodshed and human rights violations in Syria once and for all.

Efforts to sway Security Council members to resolve the crisis and protect Syrian lives turned to South Africa as well, with Daniel Bekele and Philippe Bolopion of Human Rights Watch urging the country “to do the right thing for Syria”. Noting South Africa’s opposition to the West’s implementation of Resolution 1973 in Libya and fear of a similar overreach in Syria, Bekele and Bolopion assert that the current draft resolution “provides absolutely no authorisation for military intervention in Syria.” As such, the authors call on South Africa not to settle political scores with the West over Libya, but to act in support of the Arab League in Syria.

UPDATE (02/02/2012 @ 10:00 PM EST): The Washington Post reported that Permanent Representatives failed to reach a consensus on the revised draft resolution during negotiations on 2 February. According to the story, however, the document will be “put in blue” – meaning that it could be voted on within 24 hours if no further amendments are made – by the Moroccan mission and sent to national capitals of the Council members for further consideration.

Reuters reports that during negotiations, Russia’s Ambassador Vitaly Churkin allegedly threatened to veto any resolution submitted on Friday that included in the text that it “fully supports” the Arab League plan for a political transition in Syria. In the media scrum after the debate, Council members disagreed on the progress made. The Permanent Representatives (PR) of Pakistan and Togo thought that the Council was close to achieving consensus on the draft, but Ambassador Susan Rice, PR of the United States, did not share their opinions. Meanwhile, according to Inner City Press, when asked about how the negotiations went, India’s PR was quoted as saying, “not so well“.

Despite being sent to capitals, it remains unclear whether there will be a vote on the resolution before week’s end. The BBC reported that Colombia’s Permanent Representative to the United Nations confirmed that negotiations would continue on Friday, 3 February.